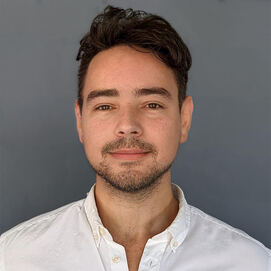 Tom serves as CoLab’s expert on all things Shopify. He also supports our business development team, bringing extensive knowledge of ecommerce plus strong organization, communication, and design aesthetics. Tom was drawn to tech for the creative aspect and potential for self actualization. He loves learning new languages and application development.

In 2015 Tom launched the first ever Shopify store for what would become a nominated presidential candidate, Hillary Clinton. The store shattered records created by any previous or competing presidential campaign. Since 2016 Tom has gone on to provide ecommerce services for hundreds of the most iconic political candidates and progressive organizations within the United States.

Tom holds a BA in Political Science from the University of Rhode Island and also studied at the University of Copenhagen in Denmark, pursuing his passion for social justice. He lives with his daughter in Rhode Island, where he also grew up. Tom loves cooking, gardening, military history, physics and most importantly spending time with his family.