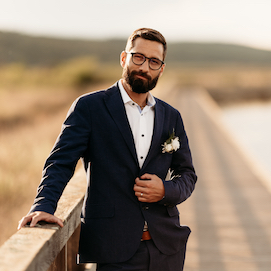 Jure likes to break things down and take them apart. Unlike most children, Jure found video games a rather unengaging form of entertainment. Instead, he would spend hours dismantling whatever was at hand: remote controls, floppy drives, toasters, phones – even the system folder files in his parents' computer. Eventually, his parents grew weary of calling technical support, finally supplying him with his own copy of the OS to dissect in peace. Thus, his journey began.

After some years as a professional printer, Jure realized his true passion was IT and set about to master web development. His overall enthusiasm and passion allowed him to become a successful developer, administrator, and designer using a range of available resources––from books and source code to online tutorials. He continues to nurture this desire to understand more of the world around him, and hopes future projects will see him expanding into the territory of advanced big data systems.

An avid outdoor enthusiast, Jure has also managed to do some pretty amazing things while riding various boards. It's no surprise, then, that he values projects focusing on sustainability and environmental protection––projects that capture a feeling, as he says, of “working for the greater good.” He is particularly excited about the opportunity for international collaboration, addressing challenges of increasing scope and complexity, flexible work-flow, and personal growth. Fortunately, working with CoLab we're certain he'll have ample opportunities to accomplish these, and other, noble goals.