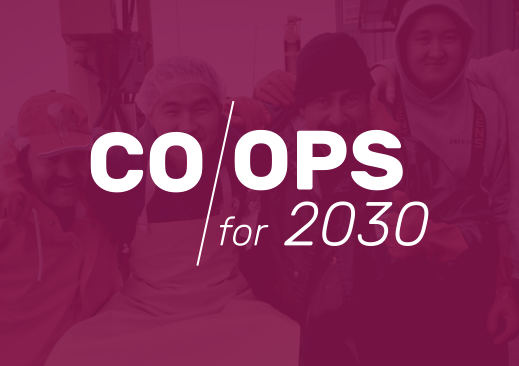 Helping the International Co-operative Alliance Build the Next Global Economy

What does the the International Co-operative Alliance have in common with the Paris Agreement and the Girl Scouts? Read on to find out.

From October 11–13, 2016, the Alliance showcased the Co-ops for 2030 platform during the International Summit of co-operatives in Quebec City, which was attended by 2,950 attendees from 116 countries, including five United Nations Ambassadors. The Alliance detailed features of the Co-ops for 2030 portal whereby co-ops use a pledging model to build the Next Global Economy. The project was recently completed by a CoLab team led by member-owner and project manager Cris Nelson along with Ralph Cutler, Amandeep Singh Sapra, Scott Nelson, and Karen Menezes.

Through Co-ops for 2030 the Alliance collects pledges from co-ops around the globe, each promising to improve the world in one or several distinct ways. For example, a co-op may pledge to raise the standard of living of its members, or to increase its use of renewable energy. CoLab was responsible for the redesign and development of this unique pledging system.

Co-ops have a history for leading the fight to make the world a better place; Co-ops for 2030 strengthens this history through the practice of pledge-making. To anyone with experience in similar social or environmental justice practices, the Co-ops for 2030 pledge system may sound familiar. In fact, among categories such as “eradicating poverty,” “building a more sustainable food system,” and improving “basic goods and services” access, Co-ops for 2030 includes the option to submit pledges for “protecting the environment.” The Alliance calls each of these categories action areas.

Now following CoLab’s redesign, visitors to the Alliance’s Co-ops for 2030 can dynamically filter co-op pledges using any of these four action areas. They can then combine these areas with one of seventeen Sustainable Development Goals (SDGs), country selection, and other options. This level of functionality, while more involved on a technical level, aligns with Co-ops for 2030’s flexibility to customize pledges. It also means, for the Alliance, that the website better represents the specificities of pledges across multiple variables and key goals. Pledges, in this sense, can be more meaningful as they become more detailed. (Note that CoLab plans to make a major pledge around retail and consumer waste by the end of the quarter.)

CoLab was able to help the Alliance realize its goal of redesigning a dynamic Co-ops for 2030 pledge system in a way that strengthened the features’ overall functionality. Ultimately, this meant not only a success for the Alliance, but also for the co-op community and its ongoing investment in making the world a better place. As the Alliance has demonstrated, building the Next Economy can start with something as simple as a pledge—for society, the environment, or, indeed, the world.