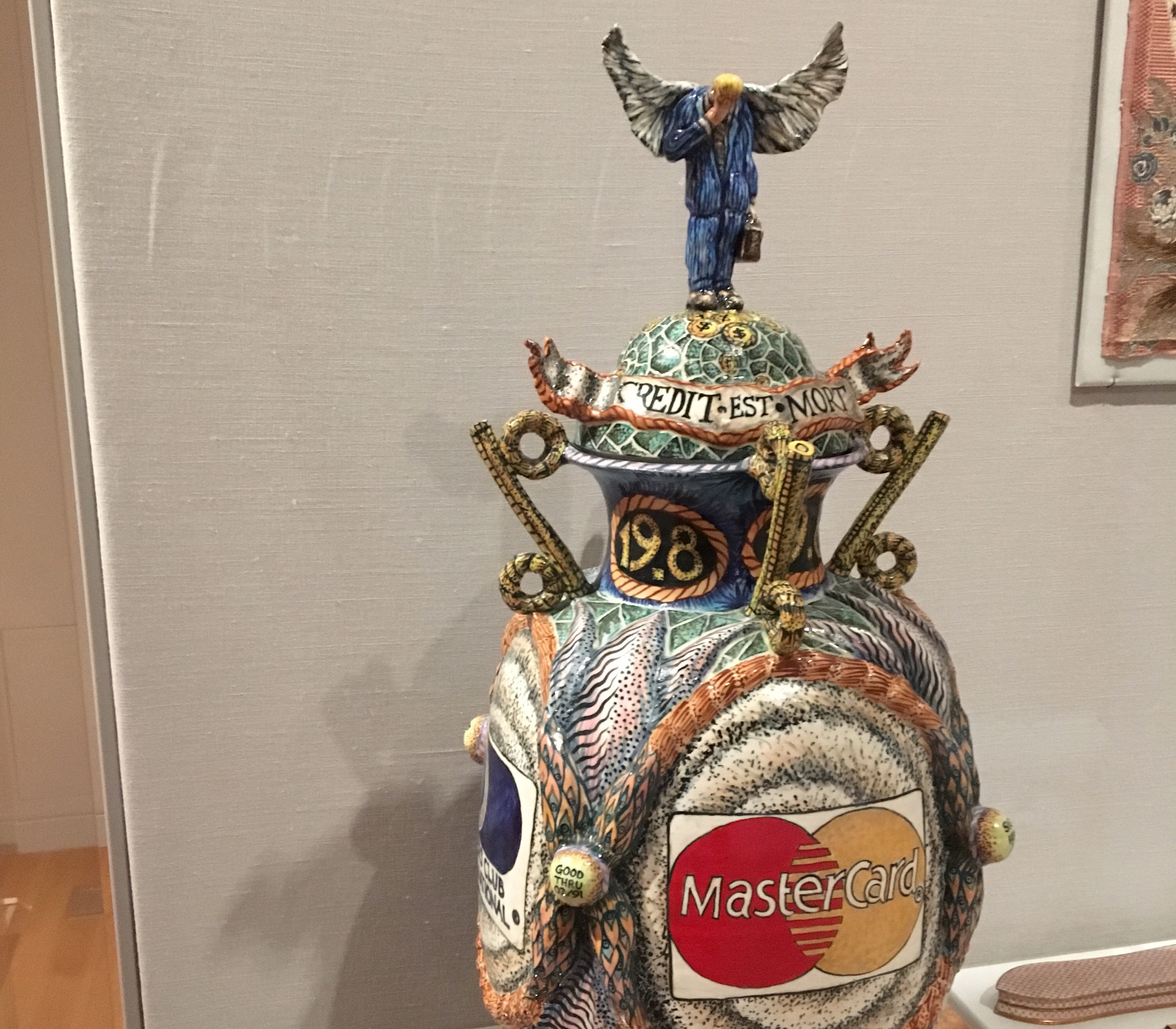 Photo of the “Credit Card Reliquary Vase, 1991” at the Cooper Hewitt Museum

As a worker-owned collective with collaborators in more than a dozen countries, CoLab embraces diverse perspectives around technology. But cryptocurrency is a special case of technological development, as it is shaping how we feel about culture and politics.

Last month, Ethan, David, Tomaž, and myself, Doug, took time to for a chat about CoLab’s interest in cryptocurrency technology. By the end of the conversation, we realized that we’re still in the process of figuring out where we stand on many important issues. What follows is an abridged account of one of CoLab’s many recent conversations around cryptocurrency: CoLab’s crypto-convo.

Many of our friends, allies, and others are talking about cryptocurrency. With implications for everything ranging from global politics and contemporary art to grassroots activist movements and concerns over the financing of terrorist organizations, cryptocurrency has captured the interest and imaginations of a wide range of both detractors and supporters. What makes cryptocurrency what it is? What differentiates it from non-digital currencies? How might it affect culture and politics? With cryptocurrency generally giving rise to so many different ideas and purposes, we felt it necessary to first define terms and clarify some basic assumptions.

Beginning our conversation, Tomaž noted that a defining feature is crypto’s “lossless” character: by storing all transactions on a distributed ledger, no one in particular can obtain complete access to the system, making hijacking it virtually impossible. Each transaction is correlated to a hash. And altogether this is known as the blockchain, which uses cryptography to keep the system secure.

In addition to the “crypto” part, then, what about “currency”? David pointed out the potentially misleading aspect of even referring to crypto as a “currency,” noting that, while many have invested in Bitcoin by retaining various amounts of it, few are using cryptocurrency as a monetary tender on an everyday basis. Ethan then suggested a rather useful definition: cryptocurrency can be understood as a “cryptographically secure distributed ledger.” This means that the blockchain prevents double-spending, and the system cannot be reverse engineered.

Since cryptocurrency can often be used as a kind of virtual stock option, the problem of regulation becomes relevant. Recently, for example, the US Securities and Exchange Commission (SEC) suspended trading activity of The Crypto Company, a business that describes itself as offering “portfolio of digital assets, technologies, and consulting services to the blockchain and cryptocurrency markets.” Exactly how such issues around financialization and regulation will play out is a question relevant both to crypto’s future and its foundations—in addition to its various implications for culture and politics.

Cryptocurrency’s Connections to Culture and Politics

Many have criticized cryptocurrency as premised on a right-wing, libertarian political perspective that would seek to undermine government regulation. Critics such as David Golumbia have traced cryptocurrency’s ideological roots to the cyberlibertarian movement. For instance, by anonymously exchanging Bitcoins for goods and services, users can potentially avoid taxes and ultimately undermine state-level extraction that would pay for public programs such as welfare or health care. One can thus easily see the draw here for libertarians—a point that undergirds Golumbia’s argument in addition to the perspective of leftist economist Doug Henwood, who similarly criticizes crypto on the grounds of a critique of political economy.

But must crypto remain limited to a right-wing attempt to undermine government, taxation, and economic regulation? Are there not equally important, if perhaps overlooked, possibilities for cryptocurrency on the progressive—and even leftist—side of the political spectrum? Or, as CoLab's David suggests, do some of the issues crypto introduces fall outside of this cartesian political plane?

There are those who have argued adamantly for cryptocurrency’s potential in left-liberal movements. See, for instance, this essay, written by hacker and artist Denis Jaromil Roio, which uses quotations from contemporary philosophers like Giorgio Agamben and Christian Marazzi to argue for Bitcoin’s (leftist) revolutionary potential. How exactly this works is not entirely clear. But its ability to undermine fiat currency and government regulation is perhaps only one of crypto’s many points of contention.

We then discussed the vexed question of anonymity. On the one hand, anonymity can be valuable thing. During our conversation, Tomaž argued that law enforcement shouldn’t have the ability to monitor all financial exchanges. And, moreover, he notes that many important social movements, including the civil rights movement in the US, historically relied on a mix of legal and illegal activities. Cryptocurrency could be used for similar ends, as some have argued, and the government shouldn’t be allowed to regulate such activities. Many have similarly outlined cryptocurrency’s potential in specific activist contexts, for example, in bringing financing to underbanked communities. On the other hand, though, some have warned of dangers such as financing terrorist organizations, sanctions evasion, illegal drug trafficking, and crypto’s potential role in establishing authoritarian regimes.

The conversation of course didn’t end there. For instance, to my own question of “How do we do income redistribution without nation-state-based currency?” David suggested that crypto should be thought of as more in line with DIY aesthetics: “in general, maybe we can just do it ourselves.” Ethan noted further that although “technologists have a knack for being anti-establishment,” at the same time, Bitcoin should be conceived as a tool with mixed implications. In the end, perhaps this is as much as we can all agree on: cryptocurrency is a tool that can be used and conceived in a myriad of ways.

Future Work for CoLab and Cryptocurrency

One use of cryptocurrency that CoLab is currently considering takes its cue from the subjective domain of storytelling. In the coming weeks, we’re helping to launch INTO, an interactive platform that promises to reinvent digital storytelling. With this platform companies like TCHO Chocolate can show consumers how they help farmers transition from cacao growers to chocolate production partners. The validity of that narrative hinges on supply chain data, along with video, testimonies, and other media. CoLab is currently considering ways of making such data more readily available for INTO users through cryptocurrency technology. For now, though, CoLab’s will continue to put our political and cultural convictions at the core of our work, while continuing the conversation about what cryptocurrency’s position might be relative to those values.