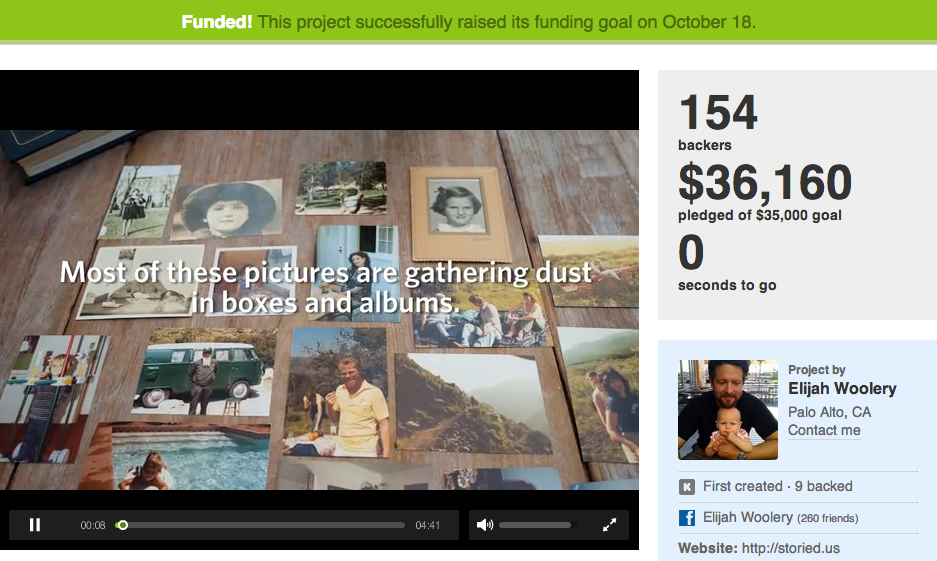 Forever is a strong word, and yeah, perhaps a tad exaggerated. Though the stories you can create, store and share on the CoLab supported Storied app can live on a lot longer than those faded, torn photographs our Mothers have stuck in a shoe box collecting dust in the closet. Or are they under the bed?...

One thing that definitely does not live forever is a Kickstarter campaign. Thankfully, with the help of more than 150 backers, we reached our goal of $35,000 within the 30 day timed challenge. This will be a major boost towards the final execution of the product before launching publicly.

In the closing moments of the Kickstarter campaign, CoLab hosted a party in true collaborative style. Using google hang to simulcast with a sister event on the west coast and creating a live storied movie using the app prototype with the friends and family or our dear friend who’s birthday was also part of the festivities. Shout out to Serendipity Catering for the yummy snacks as well. Also a shout out to Anaar, the birthday girl, whose thrilled to have a personal digital file of the experience and the stories that were brought to light and captured with the aid of Storied.

The history behind Storied is also memorable and touching. When creator Elijah Woolery’s father-in-law, Don, was diagnosed with Alzheimer’s, his family members felt a powerful desire to record as many of his memories as possible before his mind began to slip away.

Eli’s sister-in-law, Kathy, was amazed by how, even when he struggled to remember what day it was or what he ate for breakfast, her father could eloquently recall stories about his past—especially when looking at photographs. She spent a year scanning photos, reviewing them with both her parents and recording their memories so that the family could treasure and retell the stories for future generations.

Eli, being a young entrepreneur, saw this as an opportunity to use his tech background to make this process easier and contribute something of true, heartfelt value to the world.

Elijah then joined forces with CoLab co-founder Rylan Peery to bring Storied out into the world. CoLab as a cooperative is also contributing heavy in it’s technical development.

Stay tuned for more as this amazing project blossoms and evolves!