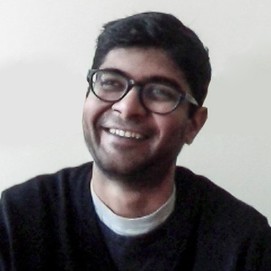 From the early days of IRC and chess matches on telnet servers, Sanjay has always been fascinated by technology. A web development career path was inevitable for Sanjay, having spent the majority of his formative years in his second home: the internet.

After completing a diploma course in Urban Studies, Sanjay spent several years writing for non-profits and magazines. He met CoLab at the right time - burnt out as a contractor and evading the traditional corporate setup, Sanjay saw CoLab as "an alternative 3rd way."

Sanjay is the resident standards geek, a close follower of web standards processes and mailing lists. He keeps CoLab on the cutting edge of the emerging languages and protocols that are growing on the web.

In 2007, Sanjay co-founded an arts space called CAMP. In addition to becoming an active space at the confluence of art and technology in Bombay, CAMP is the recipient of a number of international awards and accolades.

Most recently, Sanjay worked on a historical gazetteer project used by the Library of Congress and New York Public Library. He currently also works on developing the tech platform for the Karnataka Learning Partnership. He lives in Bombay and, in the non-digital world, is passionate about travel and enjoys playing cricket and table tennis.